With an ever greater choice of insulation on the market and a growing awareness of the many roles insulation plays, it’s worth considering the most effective option for your application. 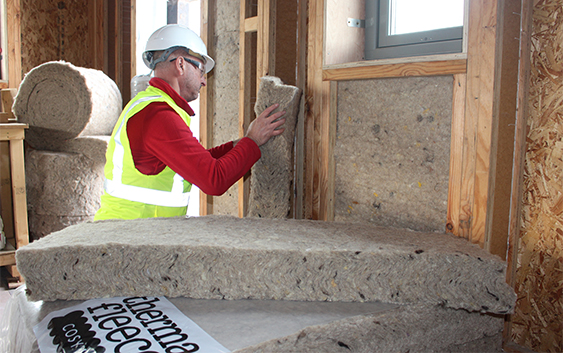 The use of natural fibre insulation is growing rapidly. With this in mind, Mark Lynn, MD of Eden Renewable Innovations aims to highlight some of the reasons why you should be thinking seriously about products such as Thermafleece sheep’s wool insulation.

Sheep’s wool is a great material. It’s a natural insulator, locally grown, sustainable, and breathable, it dampens sound and is fire safe. That’s why we use it to make Thermafleece. Thermafleece is manufactured in the UK and combines British wool with recycled polyester fibres to create effective, safe and sustainable insulation.

Thermafleece provides heat insulation in a several ways. Not only does it act like other insulation in preventing heat loss by limiting air movement, it also prevents heat gain during peak summer months. This is due to the relatively high heat capacity of sheep’s wool that allows the insulation to absorb and store heat and release it much later in the day as temperature cools.

Natural fibres such as sheep’s wool are breathable meaning they can bind and release moisture allowing Thermafleece to act as a humidity buffer. This helps protect structural timber elements from moisture, preventing the accumulation of harmful water and providing a stable fabric. This is particularly appropriate in the more damp and humid climate of the British Isles.

Breathability is very important in older properties, but using sheep’s wool insulation isn’t just limited to historic and period properties. You can use Thermafleece almost anywhere in the building. It can be used alone or in combination with most other types of insulation to improve thermal mass, breathability, acoustics or to reduce environmental impact of the building fabric.

The acoustic properties of natural fibre insulation are often overlooked because of their irregular surface, shape and density, fibres such as sheep’s wool are very effective at disrupting sound. That’s one of the reasons why sheep’s wool insulation can provide acoustic performance comparable to the best mineral fibre products.

How materials react to fire is an increasingly important consideration. Sheep’s wool has a high ignition temperature and reacts to fire by charring. To improve these natural characteristics, the wool in Thermafleece is also treated with a low level of borax in order to ensure our insulation is fire safe. All Thermafleece products pass British Standard tests for smoulder resistance and flammability.

In the past, natural fibre insulation has been seen as the most expensive choice and difficult to get hold of. That’s no longer the case. Thermafleece is widely available throughout the UK thanks largely to the extensive distribution network provided by CCF and its sister companies. In many cases, systems incorporating Thermafleece have a lower cost than alternative systems.