The Glasgow branch gave a heart-warming goodbye to Brian Duncan this week, as he retired as a warehouse assistant after 15 years with the company. 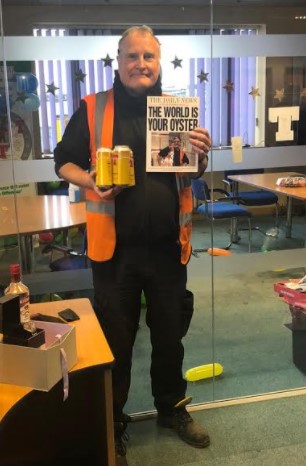 Brian Duncan, who has lived and worked in Govan is affectionately known as Stacker, was videoed leaving the Govan-based premises for the last time to the sound of CCF’s forklift horns and co-workers applauding his long service.

The emotional send-off has since received thousands of views and over 2,800 reactions on LinkedIn. Many comments are from Brian’s former co-workers who celebrated his positivity and warm personality, which made him so popular at CCF Glasgow.

Brian, said: “Over the last 15 years I have made so many friends and always enjoyed coming to work, it has been a real joy to finish my career here at CCF before retirement. I don’t know how the team planned this send-off without me knowing, but it meant a lot. They’re all like my family and I will always remember my time at CCF fondly.”

Matthew Brown, Branch Manager at CCF Glasgow, said: “It’s really sad to see Brian go, but we are so thankful to him for his service over the last 15 years. Brian really deserved an amazing send-off and I am proud that the team gave him a memorable goodbye. He’s left some big shoes to fill, but we wish him all the best for the future.”